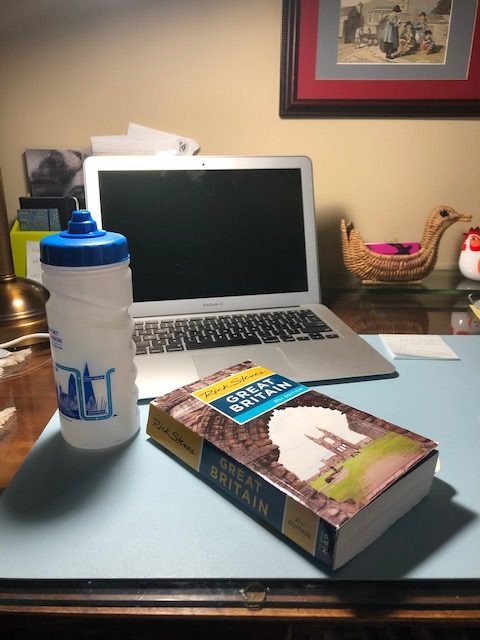 My virtual trip of England started in London. I’ve been to London many times, and I have my favorites there. I wonder if the “Greek tapas” place where I love to eat before a play at Shakespeare’s Globe is still there. And it will be a long time before people can crowd into the outdoor Globe venue to see live Shakespeare.

On this trip, for the first four days, I decided to take a look at things I haven’t seen before. I found Look Up London Live, https://lookup.london/live/, where Katie the Blue Badge tour guide gives wonderful twenty-minute tours of places all over London. Tours are free, but you can contribute a donation on line. I toured Tower Hill, Hampstead, Bloomsbury, and Smithfield. Each tour covered the history of the area and Katie spoke about historical figures, Samuel Pepys in Tower Hill, Samuel Johnson and Bram Stoker in Hampstead, the Titanic and Charles Dickens in Bloomsbury, and Richard II and William Wallace in Smithfield. Personally, I was most interested in anything medieval, and got to see some surviving churches from that era.

I also tried to eat the lunches I love to eat in London. Sandwiches are the thing for me when I go to lunch there. Frequently, I am on my own while my husband works in his London office. I can grab a smoked salmon (smoked salmon in buttered whole-grain bread), or an egg and cress sandwich (basically egg salad with bit of watercress in it instead of green onions), and salt and vinegar crisps Sometimes I find a park to picnic. I also tried to make the falafel wrap that is in the café in the atrium at the British Museum. I made 2-inch falafel rounds according to a mix, cut 2 of them into halves, added chopped lettuce and tomato and baby arugula, and drizzled with tahini. Then I wrapped it into a whole wheat tortilla. It wasn’t bad.

Next time: I venture out of London to see some castles!